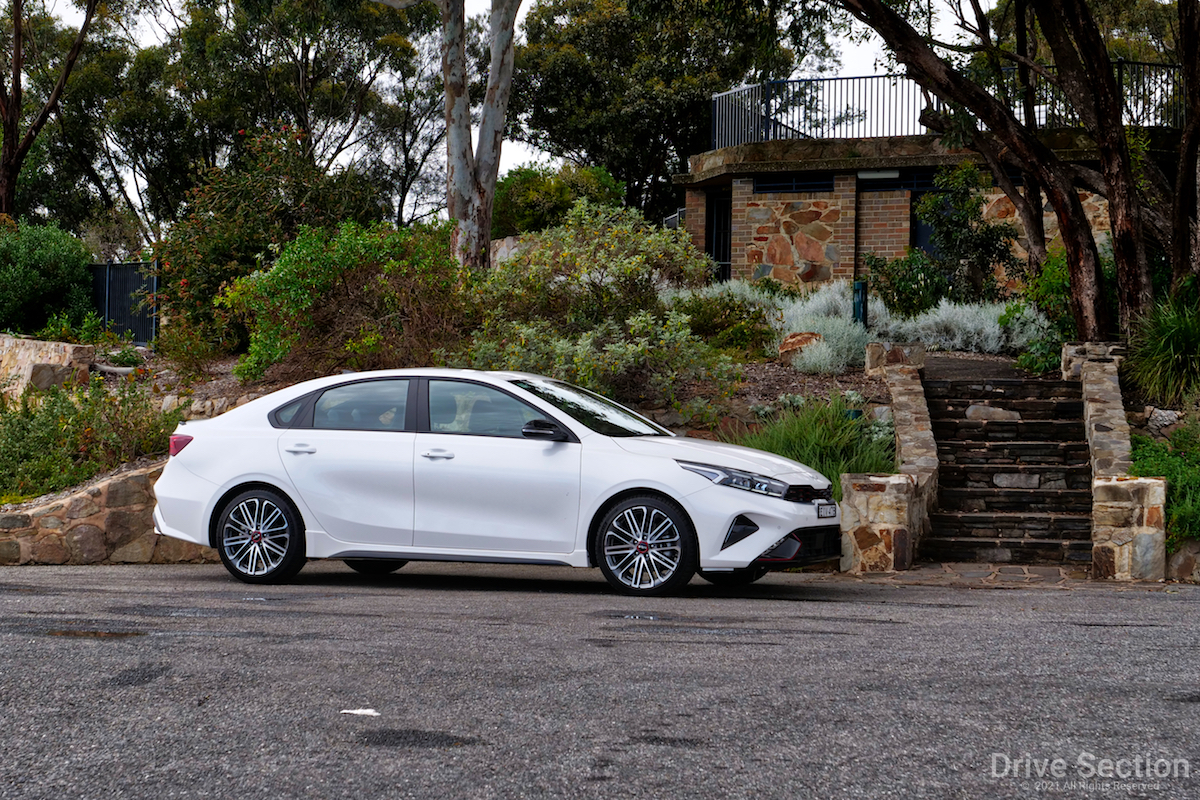 The facelifted 2022 Kia Cerato GT has only evolved into an even more appealing package, and despite a price rise remains one of the best-value buys on the market.

Kia is a company known for building cars that offer insanely strong value for money. On every level from the diminutive Picanto all the way to the rear-drive Stinger, its range might not offer the best in materials and other luxuries, but it always seems to punch above its weight.

However, no model it offers is a better example of this than the 2022 Cerato GT. Offered in both hatch and sedan guises – the latter is what’s on test here – this range-topping version offers more than just some extra glitz, as it’s a proper, bonafide performance variant of its second-smallest model.

Priced at $36,990 drive-away regardless of which body style you go for, pricing is up by $4000 compared to the pre-facelift model, but sharper styling and additional features certainly go some way to justifying why this is still the best-value buy the Korean marque is offering right now.

Not only was the Cerato the first model to wear Kia’s classy new logo here in Australia, but with distinct new LED lighting signatures, some extra splashes of red, a bolder and more aggressive front end design, and bigger exhaust outlets at the back, it really does stand out next to lesser Ceratos more than ever before. The fact it’s riding 5mm lower than the standard model and sitting on 18-inch wheels as well only adds to the sporty look even more.

Personally, I reckon this sedan version is the better looking of the two body styles, particularly when viewed side-on. The sedan’s boot is technically larger at 502 litres as well, although the 428 litre boot of the hatch is actually far more usable thanks to its under-floor storage, and with a wider opening it’s easier to load, too. Both will be just as comfortable for passengers inside, however, with plenty of legroom both front and rear.

Curiously, and on the topic of the boot, one of the most egregious bits of cost cutting I’ve ever seen was something I noticed in the boot of this sedan model – there was absolutely no insulation or carpeting on the top of the boot, under the rear parcel shelf, meaning there’s not only some wiring on show but even the backside of a fully exposed speaker. This obviously isn’t something that will really affect anyone, but it’s a sign that when you’re offering this much so cheap, money has to be saved somewhere.

Fortunately, that place isn’t inside the cabin, as the Cerato GT is unbelievably well-equipped. Not only does it get unique leather upholstery with red stitching and piping, but the front seats are both heated and ventilated, and the driver’s seat even has a two-position memory function as well. A 10.25-inch touchscreen is new for 2022 and looks fantastic against the 8.0-inch screens many cars in this class still have – although it lacks wireless Apple CarPlay or Andoid Auto, so don’t forget to bring a cable – while that exposed speaker in the boot was one of the eight that make up it’s wicked JBL sound system.

Aside from the infotainment screen, the 4.2-inch TFT display in the instrument cluster is now in colour, rather than black and white, although it’s a shame it’s still so small. An electronic parking brake with auto hold function is also a new and welcome addition, although it does spell the end for any handbrake turns. A sunroof has also been added to the Cerato for the first time, further justifying the price hike. It even now has Level 2 semi-autonomous driving capability in the form of its Lane Follow Assist function, which is pretty impressive for a car in this class, especially so as the system works quite well.

Of course, all the expected things are here as well – keyless entry and push-button start; dual-zone climate control; a wireless phone charger; and a comprehensive active safety technology suite that includes blind-spot monitoring and rear cross-traffic alert which are both disappointingly absent on its twin-under-the-skin, the Hyundai i30 N Line Premium. It’s a seriously impressive package, then, and probably now the most replete in the class given the comparable i30’s lacking tech.

There’s no separating it from the i30 on paper, though, as both share the same 1.6-litre turbocharged four-cylinder petrol engine producing 150kW at 6000rpm and 265Nm from 1500-4500rpm. A seven-speed dual-clutch automatic is the only transmission available in the GT, and like all Cerato models, it’s front-wheel drive exclusively.

With this engine having been around for a good few years now – tracing back to the original Hyundai Veloster, and with practically unchanged outputs since those days – it’s incredibly proven and continues to be a perfectly-fitting engine for the Cerato GT. It might not be the absolute punchiest thing, but it pulls well through the mid-range and is eager enough when you really lay your foot into the throttle.

What unfortunately lets the side down a bit, however, is the dual-clutch gearbox. Occasionally, you’ll feel it stumble shifts, and the downshifts aren’t the absolute quickest – something that’s a real shame as in the i30 N Line, its tuning sees it feel smoother and quicker. Upshifts are still great, though, and compared to the six-speed slushbox in other Cerato models, it’s definitely an improvement.

Between the turbocharged engine and dual-clutch ‘box, the Cerato GT rather impressively manages to be the most economical model in the range as well – put that down to the engine’s effortless mid-range and lower displacement, and the inherent efficiency of these types of transmission. Fuel consumption is claimed at 6.9L/100km for the GT sedan, and I saw an impressive return of 7.8L/100km after 595km of mixed driving. In the real world, lesser 2.0-litre models are likely to see a return in the nines.

So it’s a good driveline that the Cerato GT packs, but what’s truly great with this car, though, is its chassis. With a unique sports suspension tune, and an Australian-specific tuning at that, the poise with which it corners is most impressive.

Sporting quality Michelin Pilot Sport 4 rubber, the front-end grip is brilliant, and the steering is direct and on the heavier side which gives some good confidence behind the wheel. It remains incredibly flat through the corners as well, demonstrating the sheer rigidity of this chassis as well. Although the difference between the sedan and hatch will go undetected by most people in most scenarios, when you’re really pushing it to the limit, the inherently more rigid sedan is the one you’ll want to have.

Despite the chassis’ stiffness, it still rides pretty decently for a car of its ilk as well – it’s less supple than the i30, but this is meant to be the sportier of the two. It’s unlikely to jar too much on a daily basis, though, and only serves as a reminder of just how competent a handler it is.

What’s likely to leave you happiest of all, though, is remembering that while this may be a turbocharged entry-level performance car, it is still a Kia, meaning you get the peace of mind that is the company’s seven-year unlimited kilometre warranty here in Australia, along with seven years of capped price servicing – pricing for that averages out at $462 per visit, although the intervals are a shorter 12-month/10,000km period, and the cost starts to creep up with each visit.

Factor in a fixed drive-away price, its minimal fuel use for a performance model, and just how much kit it’s got in its bag, and it’s clear to see just how strong a value proposition the Cerato GT presents. Having no unforeseen costs for seven years brings some real peace of mind, and by the point in time the warranty’s about to run out, you’ll likely be looking to upgrade anyway.

Of course, a $4000 price increase is still a lot to stomach even if it’s still good value at its new higher price, but with an even more well-bolstered list of features and capabilities, and that impressively smart new styling, I honestly don’t think you can go wrong with this thing.

Even if you’re worried about the perception of its badge by your mates and passers by, remember, the cheap old oval badge is gone. Now, people are going to have to do even more of a double-take than before.

Pros: Offers an unbelievable amount of standard equipment for the money, stiff and rigid chassis gives it great neutral handling characteristics, potent turbocharged engine, a good Level 2 semi-autonomous driving system is impressive at this price point
Cons: Some cost-cutting measures can be seen, ride is a little on the firmer side, dual-clutch auto can stumble a bit at times, $4000 price increase

In a nutshell: It might be more expensive than before, but the Cerato GT is at its most compelling yet. A competent performer, particularly when it comes to handling, and with a sharp new style and extra goodies, you can’t really go wrong with this thing.

Full Disclosure: The vehicle tested here was provided by Kia Motors Australia for a week with a full tank of fuel. All additional fuel expenses were covered by the author.