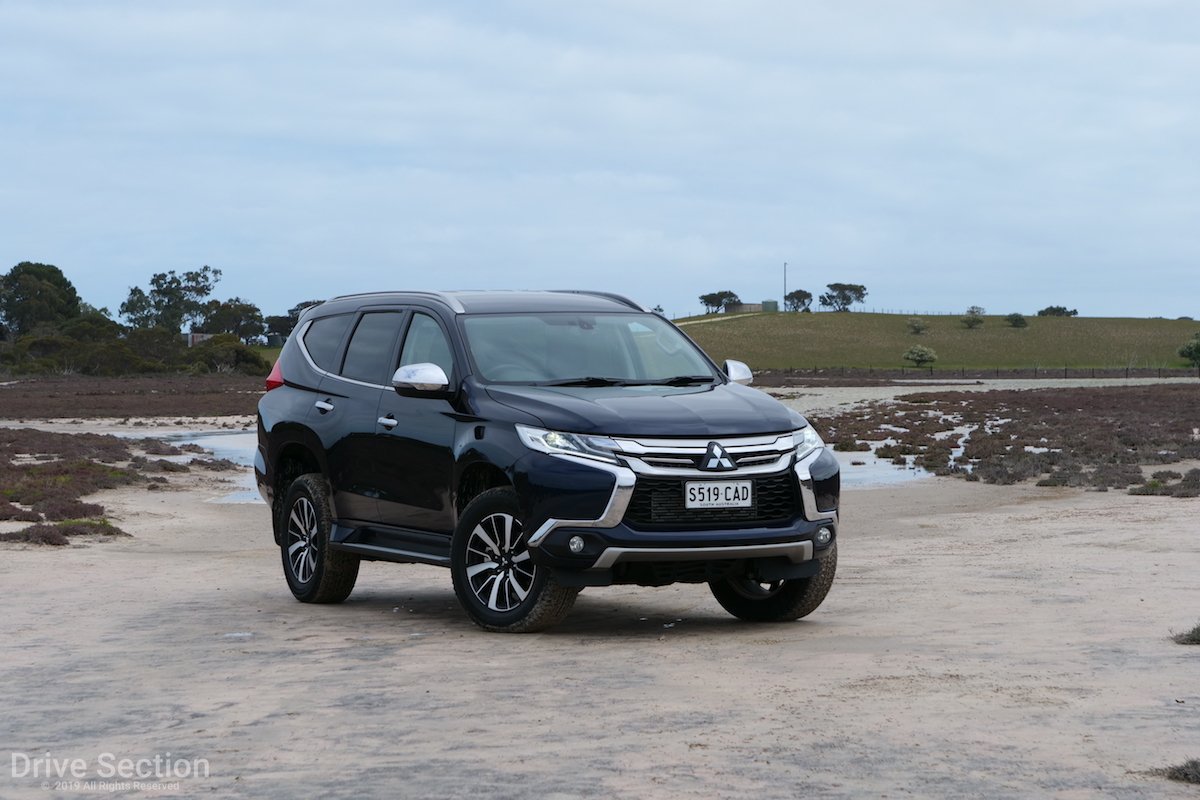 The Mitsubishi Pajero Sport is one of the best value-for-money 4x4 buys, but how's it holding up ahead of a planned update for the 2020 model year? We took the mid-range GLS version on a day trip to the Coorong to find out.

Since it first launched in 2016 to replace the Challenger, the Mitsubishi Pajero Sport has become one of the favourites in the ute-based SUV segment, with it remaining a consistently strong seller over the past three years.

Despite never really being able to catch up to the top-selling Isuzu MU-X, the Triton-based Pajero Sport has always presented itself a tremendously good value-for-money buy, with competitive pricing and a strong specifications list including standard four-wheel drive and stacks of safety kit playing to its favour.

But with a big facelift planned for the 2020 model year that will see a new look and new technology brought to the Pajero Sport range, we wanted to take a look at the current 2019 model to see whether it’s worth picking up now, or if you’d be better off waiting until the new year.

And what better way to test out a car such as this – and to explore a less-publicised part of South Australia while grabbing some interesting photos for you – than with a good old day trip to the Coorong that would see me dashing through 400km of colourful early-springtime countryside.

The GLS model on test here sits in the middle of the Pajero Sport range, with the five-seat-only GLX and seven-seat-only Black Edition and Exceed variants sitting below and above it respectively. Only the GLS is available with a choice of five or seven seat configurations, with the latter being what our tester was specified with, seeing it come in at a (current at time of publication) drive-away price of $49,490 before options, with the new Dark Blue metallic paint colour it was finished in bringing it up to a total of $50,180 – right around the sort of figure you’d expect.

Last updated for the 2018 model year, the Pajero Sport gained a few visual tweaks in the form of standard 18-inch wheels and a new rear spoiler across the range, while forward collision mitigation (Mitsubishi’s name for AEB) and radar cruise control were also added as standard range-wide to bolster its safety credentials.

Some more minor but very helpful additions also come in the form of extra padding for your knees on the sides of the very high centre console, along with a domestic power point in the glovebox – handy for tasks like charging a laptop.

Like the higher-spec’d Exceed, the GLS also has a full leather interior with some particularly supportive seats up front, both of which are power adjustable but lack the heating functionality of those in the range-topper. Although they lacked adjustable lumbar support, there was a good amount of support in the right places anyway, meaning that sitting in them all day was no hard task at all.

There’s plenty of other bits of nice trim around the cabin too, including nice padding on the armrests and door trim, and nice perforated leather inserts on the steering wheel, too.

Interior space for the front two rows is good, with plenty of headroom and legroom, and the now-padded sides on the centre console make it far more comfortable to spend time behind the wheel if you’re a bit longer in the leg as I am.

The third row, like most three-row SUVs, is only really designed for children, as evidenced by me trying and failing to fit back there while exploring the car’s seating configurations. The third row also has a bit of an awkward two-step process to deploy it, involving bringing up the backrest and folding down the base afterwards, rather than operating all as one. If you’re going to be keeping it in place all of the time, however, this shouldn’t be a bother to you.

On the topic of the interior, one other point worth noting is what technology it offers, which is one of the key things set to be updated with the coming facelift. The current 7.0-inch infotainment screen – which offers smartphone mirroring, but lacks in-built satellite navigation – is set to be switched out for an 8.0-inch unit that’s also set to be fitted to the Outlander before long, while the dated gauge cluster that lacks a digital speedo is to be replaced with a fully-digital unit.

Furthermore, on the safety front, rear cross-traffic alert is also set to be added next year, while it’s worth noting that currently, only the Exceed model is available with a related blind spot monitoring system – something the GLS tested here sorely misses out on, along with the novel misacceleration mitigation system.

Under the bonnet of all Pajero Sport models – and something that will be carried over unchanged into the facelifted model – is a 2.4-litre four-cylinder turbo diesel shared with the closely-related Triton that produces 133kW and 430Nm.

Like higher-spec’d Triton models, all Pajero Sports come fitted with the Super Select II system that allows for both on-road and off-road four-wheel drive, along with rear-wheel drive only which is what I spent most of the time in on the drive to the Coorong, given a lack of any challenging terrain on the relatively smooth and straight roads on the way there.

Unlike the Triton, however, and unlike most rivals, the Pajero Sport offers an eight-speed torque converter automatic transmission with column-mounted paddle shifters as standard, rather than the standard fare six-speed.

While its power outputs are only average, the shorter gearing achieved by the eight-speed box means that it can make good use of that power when it comes to overtaking – something I did plenty of to avoid caravans and RVs which you’ll likely encounter in this part of the world – while also keeping the engine sitting under 2000rpm when cruising along in top gear, which is something the Pajero Sport is particularly good at doing.

Between the comfortable seats, relatively absorbent suspension, and how quiet the diesel engine remains – although it can get a bit vocal under throttle – it was an incredibly relaxing drive on the way to Meningie, just under two hours away from Adelaide, where a quick bite at the bakery was had prior to grabbing some clean shots of the car in front of Lake Albert.

The next stop was another interesting photo location right by the Coorong at McCallum Point, right at the end of a drive down an at-times rather muddy track through one of the sections of the Coorong National Park, although it was not really enough to cause the Pajero Sport to break a sweat. I did lock the centre diff and throw it into gravel mode which aided a little bit with traction, but truth be told, it wasn’t really that necessary and regular 4H would have sufficed.

Given I didn’t really get a chance to push it off-road at all on this journey – with the real intention being to highlight how well the Pajero Sport works on the open road anyway – I’ll have to draw on past experiences with these things to tell you that they are, indeed, very good off the beaten path.

The Super Select II four-wheel drive system works an absolute treat and the calibration of its different drive modes for gravel, sand, and mud all tweak the throttle and traction control limitations just the right amount. There’s a good amount of articulation from the three-link coil-sprung live rear axle when trying to clear adjacent ruts, too, along with good ground clearance and departure angles all around.

At higher speeds on loose gravel tracks, it feels quite planted too thanks to how well the four-wheel drive system channels the power to the wheels. Also worth noting is the standard rear-diff lock makes a world of difference too, and presents one particular advantage for when it comes to off-roading in comparison to the sales-leading MU-X.

Back to the Coorong, a quick stop off for some more shots at one of the many little clay lakes you’ll find around these parts – although you’ll find more of them the further south you go – it was back to Meningie for another quite bite to eat. Hoping for some Coorong mullet from the chippy, the sad news was that the shop’s fisherman was on holiday. The butterfish was good, but wasn’t quite the same. If you head there now, however, you should be able to get some of what I missed out on.

To loop back around to the road home, I took the route around the other side of Lake Albert, a twisting road through canola fields with a 110km/h limit and lots of long sweeping bends where the Pajero Sport could flex the fact that it’s one of the better-handling cars in the class thanks to its fairly flat balance through these sorts of bends, justifying most of the ‘Sport’ part of the name.

After crossing the ferry at Narrung, the road does start to get a bit choppied, occasionally highlighting the fact that some of the decent handling comes at the expense of ride comfort, but never to a degree that it ever felt uncomfortable. And that’s an important characteristic, as given how comfortable it remained for the most part on this sort of a drive, it wasn’t a tiring one at all despite being on the road all day.

Clearly, then, the Pajero Sport in its current guise is a great car. It’s well equipped, comfortable, safe, and well-priced to boot, but over the past three years of its existence, you probably already knew that was the case.

The real question here is whether you should buy one now if you’re interested, or if you’d be better off waiting until the 2020 update hits out shores, and personally, I’m in two minds about it.

If it was me, I think I’d wait given how many of the upcoming improvements will really put the Pajero Sport ahead of competitors – the new technology being the primary one, while the planned new look, particularly at the rear, is a definite improvement over the admittedly hit-and-miss styling of the current model.

However, if you’re interested in buying now and can haggle for a good deal on a 2019 model, I’d say it’s worth going for as the value-for-money deal it presents is one that’s hard to deny makes it worth strongly considering.

In a nutshell: The Pajero Sport is yet another solid value-for-money proposition from Mitsubishi,  just like the Triton upon which it’s based.

Full Disclosure: The vehicle tested here was provided by Mitsubishi Motors Australia for a week with a full tank of diesel. All additional fuel expenses were covered by the author.