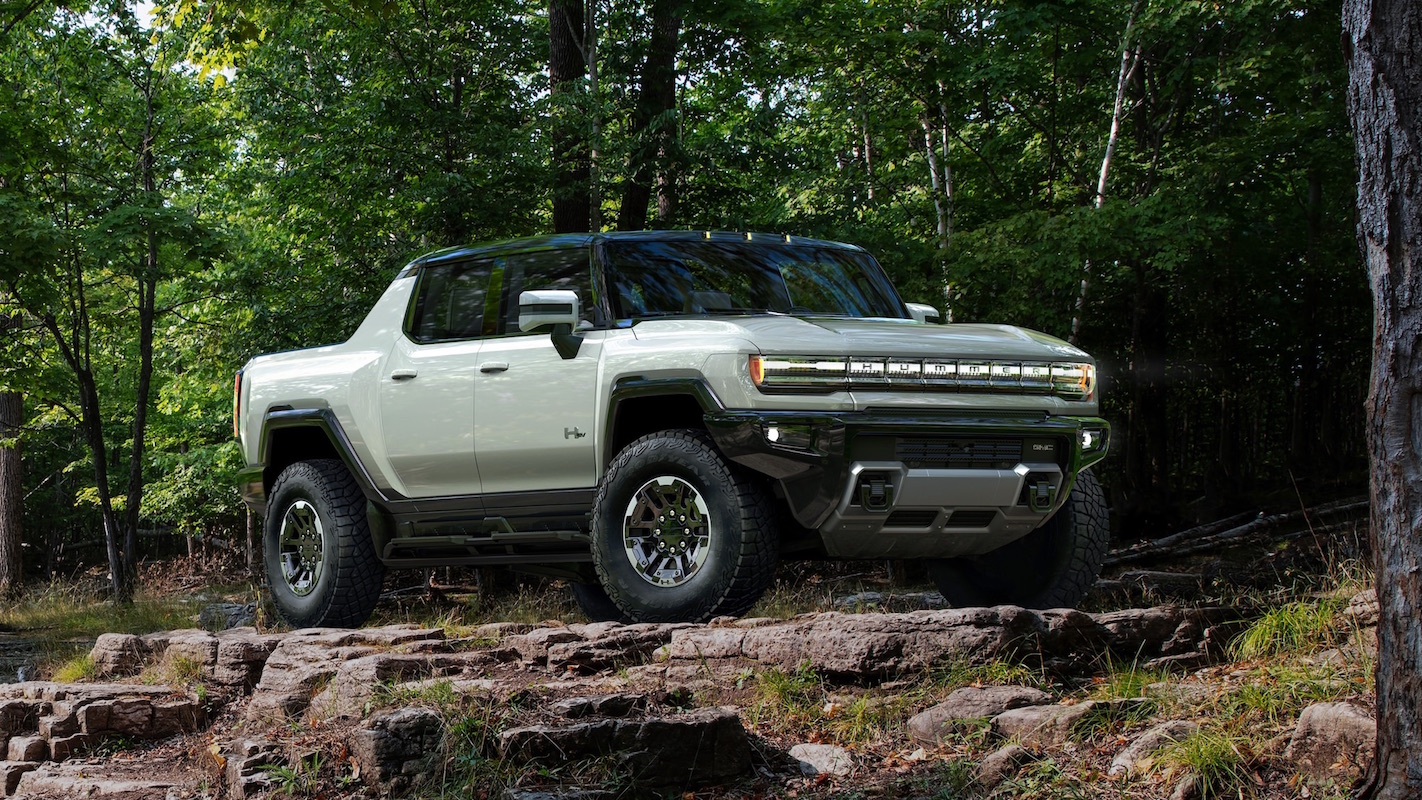 The first fully-electric addition to GMC’s lineup, the Hummer EV will be based upon the company’s new Ultium Drive architecture that uses in-house batteries and drive units, and is billed as offering high levels of “capability, efficiency, and performance.”

Set to be offered in four different trim levels in total, the Hummer EV will launch next year in its top-trim first before more affordable and lesser-powered versions roll out over the following years, similarly to other EVs like the Lucid Air.

Although a kWh rating is not provided for its 24-module double-stacked battery system, GMC claims an estimated range of over 350 miles (563km) on a full charge. It will be compatible with 800-volt DC public fast charging as well, with its batteries able to be mechanically switched from parallel to series to allow it to charge at up to 350kW, which would allow for 100 miles (161km) of range to be added in just 10 minutes.

As the press photos clearly show, off-roading is the real focus of the Hummer EV, and it features some impressive features to help it out on the rough stuff – a four-wheel steering system that features a CrabWalk mode, adaptive air suspension that can be raised by up to six inches (149mm), standard-fit 35-inch mud-terrain tyres, steel-plated underbody armouring around the battery pack, and the UltraVision camera system with front and rear underbody cameras and up to 18 possible views are all available to help it tackle any situation you throw it into.

Furthermore, its impressive approach angle allows it to scale 18-inch verticals, it can wade through up to 610mm of water, and it features a number of ‘off-road widgets’ in its infotainment system to help inform the driver of of things such as the vehicle’s torque output, differential locker engagement, tyre pressure, and pitch and roll angles. It even features a ‘drift gauge’, too.

Speaking of the infotainment system, the central screen inside its cabin measures in at 13.4-inches while the fully-digital instrument cluster comes in at the expected 12.3-inches.

To help it out on the road, the Hummer EV is also equipped with adaptive ride control, advanced drive mode control, and the latest version of SuperCruise to allow for hands-free driving on the 200,000 miles (322,000km) of roads currently enabled for it.

To add another feather to its cap, the Hummer EV also allows for open-top driving thanks to its standard Infinity Roof and removable transparent Sky Panels that can be stored in the front storage area – or ‘frunk’, have you will.

While the Edition 1 will be launching in limited numbers next year, production at the retooled Detroit factory that will produce the Hummer EV will ramp up the following year with the launch of the next addition to the lineup in Q4 2022 – the EV3X which will still feature a tri-motor setup but putting out a lesser 800hp (597kW), its range will be pinned at around 300 miles, and it will be priced from US$99,995.