10 of the strangest special edition cars of all time 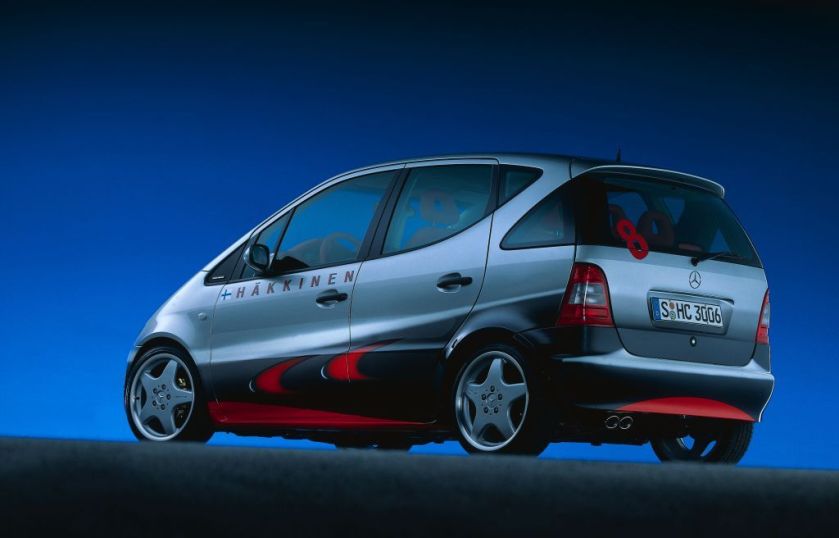 Every now and then, carmakers like to cash in on some star power to help sell some cars. Be it a fashion or lifestyle brand, or a racing driver or other celebrity associated with the company, such special editions may have seemed like quite a fun, novel idea when they were sat new on the dealership floor, but in hindsight, while some may actually be triumphant – if only to a minor degree – the vast majority can look tacky, hilarious, or just plain ridiculous.

With all that in mind, we decided to round up 10 of the very strangest special edition cars of all time – some from here in Australia, and others from around the rest of the globe – in a list that, while it may only scratch the surface, might uncover some truly hilarious hidden gems for you.

Created to celebrate Schumacher’s Formula 1 successes with Ferrari – which Fiat, of course, was the majority owner of at the time – the only benefits the Michael Schumacher Limited Edition presented over the regular Sporting model’s Abarth styling kit was the standard fitment of ABS and some chrome trim around the shifter. Hardly befitting of an F1 champion’s name, really, is it? Not the last Fiat Schumacher special, a version of the Stilo was later made bearing the champ’s name, too.

Named in honour of the former golfing pro nicknamed ‘The Golden Bear’, this dressed-up Town Car – in addition to featuring an array of different badges, wording, and ornaments on the outside – most notably featured green carpets to represent the green of a golf course.

Fitted with special upholstery that mirrored what would be found on the seats of a Lufthansa jet, the performance was anything but like that of one of the airline’s big planes, with the cutesy hatchback’s 1.3-litre engine several worlds away from offering the performance of one of the turbofan engines you’d have found four of under the wings of a 747. If you’re one of those folks who actually enjoys the act of airline flying – something I don’t, as someone with legs too long to fit in cattle class – perhaps tracking down a used example of one of these may be a way to get your travel kicks in this time of drastically reduced air travel?

Taking a leaf from Fiat’s book, Mercedes decided to honour its star F1 driver with an equally pathetic special edition. The elk-test-fearing A-Class – which looked more akin to a door stopper than a car – was given a red interior and a bit of additional bodywork, along with Häkkinen’s name plastered across the driver’s door, not that I’d have been too pleased about my name being so boldly attached to such a thing if I were him.

Better known for making biros and cheap razors, Bic put its name to the Max Power-reader’s favourite, the Citroën Saxo, with it featuring funky upholstery, a yellow shift knob, and a different colour for each of the five seatbelts. One of what was actually a great number of weird and wild Saxo specials at the time – the Open Scandal perhaps deserves a mention here as well – the interior re-trimming of this particular one is certainly rather bizarre, but unfortunately the ordinary exterior still looked as cheap and disposable as, well, a Bic biro.

Although Fender is best known as a maker of guitars – including my own favourite, the Telecaster – many of the company’s classic amplifiers have gained favour with great guitarists over the years, such as the big Twin Reverb among others. As such, Volkswagen hitting Fender up to collaborate on a special edition second-gen New Beetle with a banging 400W Fender audio system and sunburst-finished wooden dashboard makes a modicum of sense given the retro connection, although it’s no less strange as a result.

Borrowing an idea from a collaboration between AMC and Gucci in the early ‘70s, Ford’s luxury arm, Lincoln, launched a range of Continental IV coupes featuring branded styling packs from a number of high-end fashion brands. Then, in 1980, Ford’s Australian arm cottoned onto this idea when it decided to work with Cartier to create a limited edition version of its most expensive model, the locally-produced FC-series LTD. Pairing champagne paintwork with a leather or crushed-velour interior, a burgundy leather Cartier wallet, purse, and key case were included with each car.

Having had his ties with Holden cut after starting to fit HDT models with a controversial “Energy Polariser” that was merely a box of crystals and magnets set in epoxy resin that Holden wasn’t keen to be associated with, legendary racing driver Peter Brock turned his attention to importing the cheap, Soviet-made Lada Samara into Australia. A world away from the V8 Commodores he was better known for driving, the Samara Deluxe by Brock may have featured a body kit and tweaked suspension, but it’s safe to say this way far from a road-going racer.

After legendary motoring journalist Peter Wherrett complained about the tragic performance and handling of the ordinary GH Sigma, over lunch one day, Mitsubishi’s Chief Engineer challenged the Torque presenter to do a better job of it himself. After retorting by saying, “Give me a car and I will,” Wherrett presented a prototype to Mitsubishi that was sportier and far more driveable, and impressive enough for Mitsubishi to produce a limited run of 1016 units. Perhaps, then, there’s still hope for a ‘Patrick Jackson Special’ yet…

While Tony Stark may be better known for driving an Audi R8, a promotional tie-in for the Avengers: Endgame film saw the Stark Industries’ CEO’s signature scrawled across the dashboard of a humble Hyundai Kona. The newest car on this list – beating out another of my honourable mentions, the Kia Stinger Rafa Edition revealed for the 2018 Australian Open – March 2019 saw the arrival of this even quirkier Kona that, in addition to extensive re-badging and new trim pieces, featured Stark Industries logos embroidered on the seats, Iron Man-themed graphics on the infotainment system, and Arc Reactor graphics in the gauge cluster.

Want to read about a special edition vehicle bearing the name of a legendary racing driver that was actually thoroughly impressive? Check out my review of the Mitsubishi Lancer Evolution VI Tommi Mäkinen Edition by clicking here.

Patrick Jackson
A car fanatic from a young age, Patrick has put his childhood spent obsessing over motoring magazines and TV shows to good use over the past four years as a journalist, having produced content for a variety of websites, newspapers, and radio stations in that time. In addition to running the show here at Drive Section, he is also a freelance contributor to DriveTribe, FoodTribe, and the Adelaide Hills Herald.